How to Create Viral Pins That Explode Your Traffic

* This post may contain affiliate links. See the disclosure page for more information. 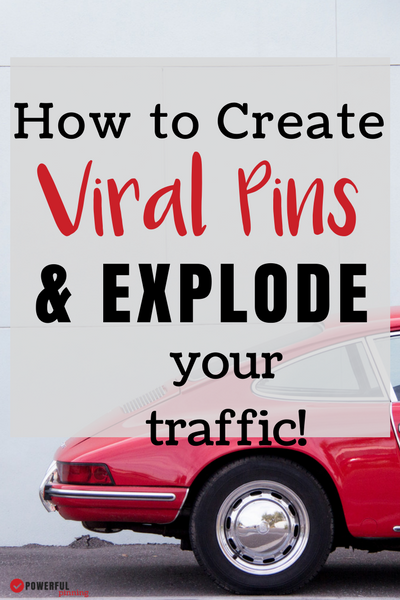 Generally speaking, I would say viral means that a post receives a large number of shares and or pageviews in a relatively short period of time.

So what does it takes to go viral on Pinterest? Let’s dissect  a viral pin to look at some of the aspects that contribute to a pin going viral.

How to Go Viral on Pinterest- What Does it Take?

First let me show you one of my viral pins.

This particular image took off pretty quickly and when it was picked up by just the right people it gave me about 20K pageviews in 24 hours- all from Pinterest.

Why? What is it about this particular image that caused it to go viral?

Some topics are naturally more shareable. They apply to more people. They are more popular in general. Frugal living is one of those topics.

This particular post has always had viral tendencies. It climbed into my top ten posts within a week of publishing it. And it often holds the number one spot. I attribute that to the topic and the headline.

Headlines are so important. They are your one chance for a first impression- and they have to dazzle! This one uses a lot of the characteristics of a good headline.

For one, it’s a list. Next, it uses a powerful phrase. For when money is tight. That tells potential readers that if they are broke- this article can help them.

Need some headline help? Check out How to Craft the Perfect Headline 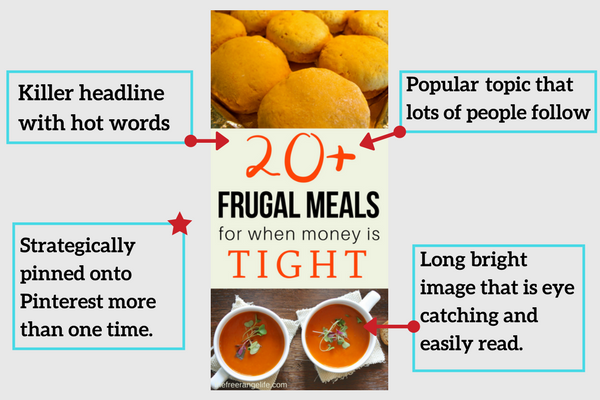 When I first published this post, I had a different pin image. It was okay. It had the same headline. And it did well- just not 20K in one day good. This pin went viral the week I uploaded the image above.

This image is bright. It is easy to read- especially on a small mobile screen. The fonts take color from the pictures to create a cohesive theme. The length is good- not too long that Pinterest crops it but not so short that it gets lost in sea of other pins.

Basically it has all the elements of a powerful pin- which gives it a much higher chance of going viral on Pinterest.

Now what good is a beautiful pin image, a killer headline, and a viral topic going to do you if no one every sees it! I have a pinning strategy in place that I tweak often and keep  up to date on how my account and pins are doing.

But at the very basic level- get that pin out there! Get it on group boards or add it to tailwind tribes. Just get it seen! And don’t forget to track your pin’s progress!

A word of warning– the nature of the internet is unpredictability. There is absolutely no way to know what will go viral and what won’t. Viral pins share a lot of the same characteristics but that doesn’t necessarily mean it will go viral if you have all of these elements. All you can do is put your best topics and images out there with the most amazing headlines and roll the dice!

Hi! I am Sarah and welcome to Powerful Pinning! This is a place to share everything I learned about Pinterest while growing my first blog, The Free Range Life. 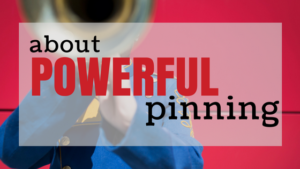